In an age of anxiety and division, Dr Dong WANG brings back memories of a global, historical sear...

In an age of anxiety and division, Dr Dong WANG brings back memories of a global, historical search for one world at the turn of the twentieth century through introducing her new book, Longmen's Stone Buddhas and Cultural Heritage: When Antiquity Met Modernity​ (2020).

This book provides the first comprehensive history of how a UNESCO World Heritage site on the Central China Plain, Longmen's caves and the Buddhist statuary of Luoyang, was rediscovered in the twentieth and twenty-first centuries. Drawing on original research and archival sources in Chinese, English, French, German, Japanese, and Swedish, as well as extensive fieldwork, Dr Wang traces the ties between heritage and modernity, detailing how this historical monument has been understood from antiquity to the present. She highlights the manifold traffic and expanded contact between China and other countries as these nations were reorienting themselves in order to adapt their own cultural traditions to newly industrialized and industrializing societies. Unknown to much of the world, Longmen and its mesmerizing modern history takes readers to the heartland of China, known as "Chinese Babylon" a century ago.

Speaker: Dong WANG is distinguished university professor of history, director of the Wellington Koo Institute for Modern China in World History at Shanghai University, and has been a research associate at the Fairbank Center of Harvard University since 2002. A director of a US National Endowment for the Humanities program (2014–2015), she currently serves on seven international editorial boards including for the Association for Asian Studies, American Foreign Relations Since 1600: A Guide to the Literature, and the Journal of American-East Asian Relations. Among previous positions spanning North America and Europe, she was chair professor and executive director of the East-West Institute of International Studies (2006–2009), director of the Centre for Asian Studies (2009–2013), and president of the Historical Society of Twentieth-Century China (2012–14).

Moderator: Julie CHUN is an American Art Historian based in Shanghai since 2011. She has been critically observing and documenting the growth of the art world in Shanghai. She lectures frequently for various foreign associations in Shanghai, including the foreign Consulate General offices and is an Adjunct Professor of Art History for the Institute for Study Abroad at Shanghai University of Finance and Economics. She serves as the Art Convener of the Royal Asiatic Society China, where she devotes her time to increasing public understanding of artistic objects, past and present. 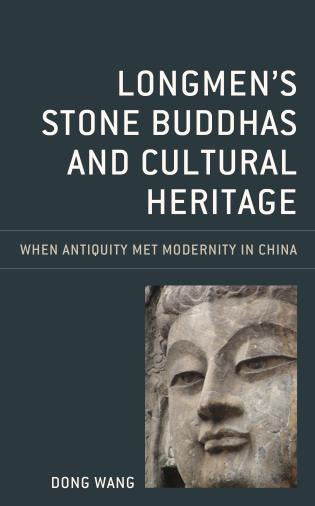 For those interested to learn more about this topic, the book Longmen's Stone Buddhas and Cultural Heritage: When Antiquity Met Modernity by Dr Dong Wang is available with a 30% discount at the Rowman & Littlefield website. Click on the link below and use the discount code RLFANDF30.